This is one of the top questions we get.  Especially now that Adobe is releasing a new version of Creative Suite once per year – with each edition potentially bringing a different or expanded file format – customers want to know if their existing projects will easily carry forward with them when they upgrade, or if they will be able to save back to older formats for clients or colleagues who are still running an earlier version of the tools…

OK then, here’s how it works. Generally, your new CS6 tools (including those in the Creative Cloud) will be able to open and use any and all earlier project and data files no problem (including CS3, CS4, CS5 and CS5.5 files), without any loss of information. In other words, all Adobe software is able to read or import file formats from previous versions of the same program – and it should happen automati­cally.

Going the other way, when wanting to use CS5 or older tools to open a file saved from a CS6 product, the answer is it depends…  Let’s take a look at the inter­operability for each application within the Creative Suite, then at the bottom we’ll talk about some additional tips and best practices no matter what your situation.

Historically in Photoshop, it has rarely been an issue as the .PSD format is pretty backwards compatible. To help ensure this, make sure that the “Maximize PSD File Compatibility” option is set when you save your file. Now with all the new features in Photoshop CS6 which prior releases don’t have, there will be some functions whose use will make your file less backwards-compatible.

In fact, many people don’t realize it but Photoshop’s common file format specification is openly published so that other tools can read, view, or save .PSD files… But if you ever run into any difficulties, you can always save your image as a .tif file – TIFF is a standard format that all versions of Photoshop can import, and its biggest advantage is that it will preserve layers, just as the native .PSD file can.

New in Photoshop CS6 now, there’s one feature that makes your life particularly easy when upgrading or changing releases – it’s the ability to migrate and share presets from Photoshop versions going as far back as CS3.

In Illustrator, when you save a file it asks you which version you want to save it as. Instead of CS6, you can choose a “Legacy Format” like Illustrator CS5, CS4, CS3, etc. – but be aware that you may lose some newer features and attributes when the document is read back in to the prior release. Illustrator actually has the best backwards compatibility of all programs as it can save down up to ten previous formats!

With InDesign, there is no automatic way to “downsave” a project like in Illustrator. However you can Export your document as IDML (InDesign Markup Language). IDML files can be read into earlier versions like InDesign CS5.5, CS5, or CS4 – but again there is the potential to lose newer features that aren’t supported in older releases. To go back to InDesign CS3 you would need to Export to INX (InDesign Interchange format) from CS4 instead.

Alternatively, you can use external file downsaving services which will do this for you for a nominal fee – going from InDesign CS6 to CS5.5, CS5, CS4, CS3, CS2, or even CS[1].

In Dreamweaver, file compatibility with older versions is not really a problem… HTML is HTML, CSS is CSS – the output is standards-based and similar across product releases. The one part that you need to migrate forward or back to a different version is your Dreamweaver site settings or definitions.

In Flash Pro, you can save in XFL or FLA format for CS5.5 or CS5, although you may lose some newer features which would not be understood by prior versions.  Creative Suite 5 versions of Flash Professional can save back to CS4 formats.

In Premiere Pro there is not an official save-back-to-old-version option (and it’s technically not supported) but some customers report fairly good success doing so anyway…  Just keep these tips in mind to help it succeed.

Premiere Pro also works like InDesign – you can export to an AAF (Advanced Authoring Format) file which is sort of a “universal” project format that can be read by CS5, CS4, etc. Exporting to EDL (edit decision list) format is another option for saving back to earlier releases.

With After Effects you can save your project in a text-based XML format or Save a Copy As CS5.5, again with the caveat that new functionality in CS6 won’t transfer down. Going the other way, there are some tricks to follow to help your older project import and work in the newer release. For more specifics on opening AE projects from prior releases and saving back to previous versions, see this post.

If you want a more automated way to export for older AE releases going back to CS3, the third-party Open Sesame plug-in may be another option.

For Audition, it’s a similar story – standard audio file formats like WAV, MP3, AIFF, etc. are fully compatible across applications, and it’s possible to import sessions from older versions particularly as XML files, but saving your multitrack session file in an older format would lose some of your mix. For migrating and bringing up files from Audition 3, there’s a very helpful conversion utility.

Once you open your older document in the newer product version, or vice versa, the program will want to change and convert your data to its native format. So the best thing to do after importing your project is to immediately “Save As…” and rename it to a new file. This way, in case anything goes wrong or if you ever want to import it again, you will still have your original document authored in the other version, as well as your new document that you can continue to develop and make changes to.

The same would apply for when you go the other way and save back a copy to a legacy file format from a newer release – use “Save As…” to make sure you preserve your original.

If you’ve been thinking of upgrading your software to make life easier, keep in mind that Adobe is still offering a worldwide discount of 40% off upgrades to the Creative Cloud to existing owners of any Creative Suite product from CS3, CS4, CS5, CS5.5, or CS6.

Having Multiple Versions on the Same Computer 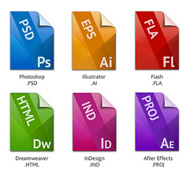 When installing any new Adobe release including Creative Suite 6, the older version(s) on your computer will not ever be uninstalled, removed, or written over. That is because people often find it helpful to continue to have access to the previous release while getting up to speed with the new one, plus as mentioned above, having those prior versions can sometimes be useful in managing older files.

So in a nutshell, this means you could install and run as many versions as you want alongside one another, and they will coexist side-by-side without interference – and many users do this. But if you decide instead that you only want the latest version on your system, then the best way to proceed is to uninstall your older releases first – before installing the later one, other­wise it’s possible that your file associations could get lost or crossed up (though this is fairly easily fixable).

Moving or Sharing Project Files Between Windows and Mac OS

Finally, customers frequently ask if they can move or share data or project files between the Windows and Mac platforms – this is increasingly common in heterogeneous environments where people have Creative Suite applications running on both operating systems.  The answer is, this is usually possible no problem – generally with most Adobe software you can transfer and use files freely between PC and Mac, and they will work and open okay on the other platform…

See here for example, the cross-platform workflow with Premiere Pro CS6, similar capability for After Effects CS6 project files, and so on.

Was this article helpful?  What CS6 or “version conversion” questions can we answer for you? Just use the comments below and we’ll get back to you quickly…