Ever since it was announced seventeen months ago, Adobe made it clear that Creative Cloud was going to be a new way of purchasing their software, an avenue for anyone to use a complete collection of the most recent versions of all of their industry-leading creative tools with a set membership plan.

Last May the company rolled out the offering, and we’ve seen the Creative Cloud continuing to gain momentum – in fact, recently passing millions of members and signing up tens of thousands more every week… Meanwhile, the tradi­tional option of buying a one-time Creative Suite license has remained for those customers who prefer that path.

Since the launch, Adobe has issued numerous free updates to Creative Suite programs (as is customary), as well as several rounds of entirely new CS product features that are only available to Creative Cloud members: 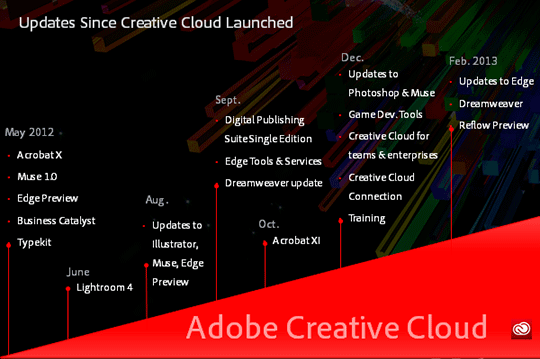 These additions have had the dual effect of making many Creative Cloud subscribers happy – while making some traditional CS6 license holders feel as if they’re missing out. On pages announcing new exclusive Cloud features, you might see comments such as:

“I am a longtime Adobe customer and have faithfully upgraded every suite since CS2. I love the tools and would like to have these newly available features – so why are they exclusive only to Creative Cloud subscribers? It seems like a disappointing way to reward loyal customers like me.”

And the response typically goes along these lines:

“Adobe said when they announced Creative Suite 6 and Creative Cloud that they were offering two models: the previous licensing model and a new monthly membership model. Each option has its advantages, pros and cons. If you go with the standard licensing, you get a static version with a high upfront cost and a license to use it indefinitely. If you go with the Creative Cloud instead, then for an affordable monthly price you get complete use of a comprehensive and ever-evolving package – and get new features as soon as they are ready at no additional charge, instead of having to wait until the next official release.”

That makes sense in some ways, but in our opinion here is a case where the company hasn’t been as clear as possible in explaining what’s behind that – in other words, why Cloud customers can receive continual feature upgrades where fixed CS licensees can’t. And it actually has to do with the U.S. accounting rules (GAAP) for revenue recognition in the software industry.

Adobe has a 30-year history of releasing discrete software products, where each version is completely delivered to the customer and recognized on their books at the time of purchase. Any future free updates to existing programs are limited to maintenance: bug fixes, compat­ibility changes, support of new hardware, and security patches. Future upgrades are separate and optional. That’s the precedent, and it’s always been done this way so that the accounting is clean and customer transactions are complete in and of themselves.

Per AICPA SOP 97-2, if the company were to try adding major features with additional value to a formal release after the fact, then they would not be able to recognize the purchase when it was made, and it would be unworkable from an accounting perspective with multiple simultaneous versions going on and trying to proportionally recognize revenue over a variable period based on undetermined future function­ality for each separate deliverable.

It was not widely disseminated, but Adobe CEO Shantanu Narayen stated as much in a 2011 conference call with financial analysts:

“In terms of moving forward and in future releases of CS, and with everything that’s changing in the Creative environment, we believe that [offering subscriptions] really allows us to have more innovation. Take a product like Edge. If you have a product like Edge that’s on subscription, that’s offered to all of the subscription customers, that provides the ability for people to stay current. And today, with the 18-month cycles, you aren’t allowed to do that, as you know, given financial accounting. So that’s the strategic rationale for continuing to drive towards subscriptions and attracting new customers to the platform.”

Other Adobe voices have confirmed this, although again it has not been widely publicized. The Sarbanes-Oxley regulations enacted a decade ago have also been cited:  “It has to do with accounting practices and isn’t unique to Adobe,” and “It is US legislation which prohibits adding features for free on perpetual licenses,” and “Having worked at Adobe, I can confirm this.”

“As a former product manager, I remember the team’s frustration when they were forced to hold back features to fit our 18-month Creative Suite product cycle. It was very difficult to deliver new innovations “off-cycle” due to our delivery and accounting model. (Every desktop software company struggles with this same challenge.) Nothing is more satisfying to one of our talented engineers than getting a new product feature into the hands of customers quickly, and now we can. But Creative Cloud is so much more than a mechanism for getting new product features in the hands of customers faster…”

“Historically, Adobe has run on a 12-18 month release cycle, and licenses were perpetual. This meant that, were we to (for example) release a new product in May, if we were to hear from the community in June that there was an absolutely critical feature that we were lacking, the earliest we could provide customers with that feature would be the following May. This is not an internal Adobe thing, it’s due to very limiting and strict revenue recognition laws which prevent the addition of new features to perpetual license customers at zero cost.

The Creative Cloud model changes all this. Because it’s a subscription system, we are going to be able to add new features to the software much more regularly than the 12-18 month release cycle, and I predict you’ll start seeing this change pretty soon. This, I believe, provides significant added value to Creative Cloud when compared to the previous model. Creative Cloud allows us to much more aggressively develop, and in these days of light-speed technological change, this will, I hope, be a great benefit.”

In the spring of 2011, in an effort to address the explosion of mobile devices and accel­erating pace of technological changes and platforms, Adobe resolved to make more frequent upgrades to the Creative Suite software. They issued a mid-cycle version – Creative Suite 5.5 – and changed their official release cycle to once per year, so that customers would have the oppor­tunity to use newer versions on a more frequent basis to catch up with technology.

And now fast forward to the current day, Creative Cloud takes it a step further. As Adobe’s growing large-scale membership-based software offering, the deal is a comparatively low price per month for the ability to use the latest-and-greatest versions of almost everything. No matter which plan is chosen, billing is steady and recognized on a monthly basis so there is no issue with the accounting – the customer simply receives complete access so long as payments are current. This means Adobe can make and deliver upgrades to what’s available in the Cloud on a frequent (even monthly) basis, and they have already done this – adding Lightroom, Acrobat XI, Behance ProSite, Digital Publishing Suite, Muse and Edge to the mix while issuing Cloud-only upgrades to Illustrator, Dream­weaver, and Photoshop.

Still, a fuller explanation might have been helpful in understanding where Adobe was coming with this new delivery model. But whatever came across, the bottom line is there became two ways to purchase the best software – the traditional perpetual route which remains, and now the new more dynamic Cloud approach which opens access to a greater variety of more up-to-date tools (ongoing innovation) at a fixed monthly rate.  Which you choose is up to you, but at least now you know a bit more on the background on how it happened this way.

Do you have any questions about CS6 or the Creative Cloud?  Check out our extensive Creative Cloud FAQ, or just ask them below and we’ll get you answers fast!