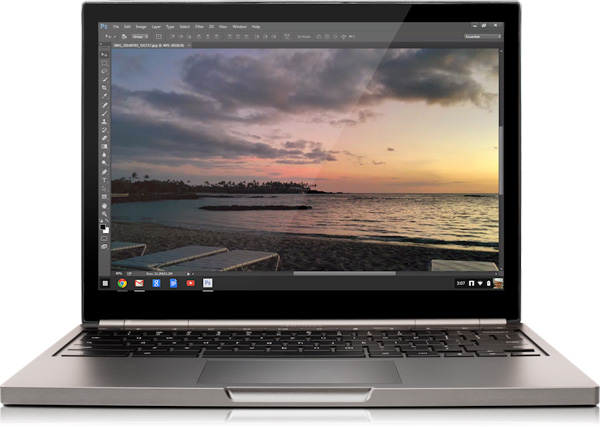 The Creative Cloud has been Adobe’s flagship product line since the launch of the CC release in the spring of last year – but ever since the Cloud was first announced in 2011, there has been persistent confusion over what the name actually means…

Even today there are still misconceptions out there that “Creative Cloud” means that you run leading products like Photoshop over the network or as a web application in your browser, as some cloud software providers do with their offerings.

But up till now, this has not been the case with Adobe – Photoshop and other major creative tools continue to download, install and run locally on your computer the same as before, while being improved and enhanced by cloud-based storage and services such as Typekit and Behance.

Yesterday, however, Adobe launched a new initiative that does allow the running of the full-on Photoshop using only a simple web browser like Chrome, and/or basic entry-level hardware like a Google Chromebook. It’s called Project Photoshop Streaming.

On the project page, Adobe says this technology enables participants to access Photoshop (with other products coming soon), “from any Windows device with a Chrome browser or from a Chromebook. Applications delivered via streaming are easy to access and easy to manage. Even better, streaming apps work directly with files in Google Drive, so no need to download and re-upload files – just edit directly in the cloud.”

Despite outward appearances, this isn’t really running Photoshop in a web browser. In essence it is just running the desktop version of Photoshop on backend servers and then operating it via remote control over the web using a small client app in Chrome. And for the most part, it looks and feels like the latest release of Photoshop, with some expected latency. 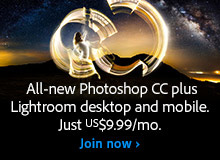 But it could lead to some new confusion for the questions we get pretty frequently, namely, “do you need to stay online or require a network connection to run Photoshop CC 2014?” (the regular answer is no)

There are some current limitations: “This Beta version of the virtualized environment does not have support for GPU, consequently GPU-dependent features are not yet available (coming soon). This build also does not yet offer support for print and input devices such as scanners.”

For the moment, Photoshop Streaming is a program available exclusively to select North America based education customers. If you’re interested, head to Adobe and apply for access:

Importantly, there don’t seem to be any indications that Adobe is going to do away with the desktop applications and replace them with a streaming interface, but rather that this would be a different or additional way to provide access to low-end devices, as well as give powerful function­ality to any remote browser.

And at a business presentation in March, Adobe’s CEO Shantanu Narayen put the kibosh on Photoshop itself ever running completely as an online web application rather than installed on your desktop:

Adobe CEO:  You know, I don’t think you’re going to see Photoshop completely in the cloud – but what you are going to see is Photoshop being able to stream, using streaming technology. And so if you want to run it on that tablet device, and do a couple of key functionalities, that’s going to be available.

But completely rewriting Photoshop, where it only runs in the cloud through a web browser, that’s not something that we think takes advantage of all of the hardware capabilities that we have.

And I think streaming technologies, I will say, have become good enough where you’re going to see, whether it’s in virtual environments within the enterprise or for casual freelancers wanting to be able to do something really quick-and-dirty, the technology is now nearly good enough to be able to do that on these devices.

And then in response to a follow-up question:

Question:  If you think about your product roadmap – and you mentioned the 1,000 new innovations in Creative Cloud – how do you balance what gets delivered in a pure cloud model versus downloads to the desktop? And relative to past version releases, does that create complexity having to manage both the cloud environment and the portion of the product that’s on premise or desktop?

Adobe CEO:  I think the solution, by definition, is going to be a hybrid solution. You have all this tremendous power on your desktop and it’s crazy for Adobe not to take advantage of that power. But I’ll give you a couple of examples of how the teams are innovating around delivering on the cloud and the benefits associated with it.

The first thing is when we come out with new features – and we’ve shown new features like photo deblurring, you can imagine 50 new features on the imaging side – the number of datasets that you can act upon in the cloud, and the ability to make sure your algorithms learn from all those datasets, the cloud is a significantly better opportunity to do that than desktop software because by definition your datasets are limited.

When we deliver features that are only in the cloud, and we’ve started to deliver that, that really addresses one of the big issues that Adobe has had. I think the other thing that we are probably benefiting from is that we really didn’t have a big maintenance and support stream and so by virtue of moving to this dynamic model we can deliver new features at an affordable price point and have our customers be current.

And in fact, Adobe evangelist Julieanne Kost demonstrated a sneak peek of this type of technology at the big annual MAX Conference last year…

Creative Cloud as a Service (Photoshop): As mentioned in the opening keynote, Creative Cloud makes it possible to host that “Adobe magic” as a service to power all sorts of apps and more. This sneak is an example of just that, a Photoshop feature running in the cloud, and made better over time thanks to crowdsourcing.

Do you have any questions about Creative Cloud?  Check out our extensive Creative Cloud FAQ, or just ask them below and we’ll get you answers fast!

To hear about future Adobe sales & deals, follow us on Facebook or Twitter, or subscribe to our RSS feed… You can also enter your email and have new articles sent directly to your Inbox. We are reader-supported; when you buy through links on our site, we may earn an affiliate commission.

This message will close in: